I Have No Faith (An Update) 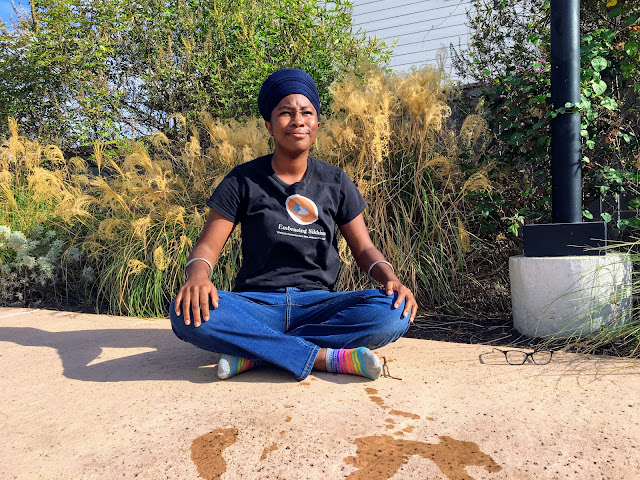 
Well, well, well. Where do I even start? Over the last two weeks (feels like months), I have been figuring myself out. Documenting my thoughts, feelings, and realizations while trying to sort things academically and spiritually. It hasn't been easy, but here are a few conclusions I have come to and decisions I have made.


I Do Have Faith...But Not In What You Might Expect

As for outside of myself, I have faith in...

- The power of weapons
- My parents (for the most part)
- The power of being an upstander and how it can change the world if we stop being bystanders
- Those who serve to protect us every day
- The mission/purpose of the Khalsa (to fight for justice and for the freedom of mind and body)
- What the Gurdwara is SUPPOSED to be (a place for temporary refuge, the education of people of all ages, langar (for those who NEED it), etc.
- Humanist values

If you haven't noticed by now, God and Guru are nowhere on either of these lists. Because I have to be honest with myself and say as of RIGHT NOW I have no faith in these things. That doesn't mean it's not subject to change, or that I've made a decision, but it is what it is. And keep in mind that I'm still figuring things out. So both of these lists are bound to get longer as time goes on.


Decisions I Have Made

1. No More Being a Religious Social Media Influencer

I have come to the conclusion that some of us "influencers" use social media to act like something we aren't or want to be. Some of us use social media to make up for our spirituality that ain't there. Not only is it inauthentic, but I believe it's unhealthy at the end of the day. Therefore, I won't be discussing Sikhi on my personal social media anymore (except for special occasions). Heck, I already started this like a week back. I'm restricting it to just our Facebook page, the Youtube Channel, and Sikhnet. And even then, I really won't be doing anything big for a while. I'm still trying to figure out who I am.

Let me tell ya'll something. When I first came into Sikhi, I recited nothing in Gurmukhi. Because 1) I wasn't dealing with the Sikh community yet so I didn't think there would be an issue and 2) that's how I preferred to do it. This changed when I started messin' with Punjabi Sikhs. "Nitnem must be recited in Gurmukhi" is the message I got from those around me and those online. And because of the constant pressure, I caved in. I started reciting Nitnem in Gurmukhi, and 2 years later, I quit doing my nitnem. Why? Because unlike most people, I value UNDERSTANDING over pronunciation and accuracy. Because let's be real, even those who "understand" what they are reciting don't TRULY understand what they are reciting. Recitation has become a ritual to them, and they aren't grasping what they're saying. They don't grasp the fact that "the True One Itself is All". They're too busy trying to make sure they can get all 5 Banis done. So that gives me two choices: (a) reciting the Banis in English and understanding or (b) pleasing others and being worried about pronunciation the whole time. Hmmm. I choose the first.

But let's forget about Nitnem for a second. I have been reading the scriptures of other religions as of late and adding them to my personal library. Actually, yesterday I went to my local Half Price Books store in search of books we've read in my History of Religions of Asia class (The Sutras, the Vedas, etc.) and I bought one book containing Buddhist scripture. Unfortunately, I didn't find much else but was shocked to find that someone had dumped a bunch of Sikh books there. And let me tell you, Half Price Books almost NEVER has books about Sikhism. I picked up a few and came to the conclusion that whoever owned it must have been someone who is/was a yogi because some were by SDI (Sikh Dharma International).


But back on topic, I am currently reading the Book of Mormon and penning down own my honest analysis of it. Don't ask me why I choose that book, but if I release my analysis in the future, hopefully the LDS won't decide to do a drive-by on me 😂 Next on my list is either the Quran or the Analects. Most likely will be the Analects if my Quran doesn't come in soon.

"Um, yeah. That sounds fun and all but why are you doing this?" Because you can't put Truth in a box. And if you say that truth only lays within your religion, then you need to take off the blindfold and break out of your bubble. Because you're wrong. Truth lives in religion and outside of religion. On the flipside, falsehood lives within religion and outside of religion. It's up to you at the end of the day to use your critical thinking and decide what's true and what's false. End of story.

It's time to hang up the bana. Yeah, I know. I look good in blue. But hear me out. I don't want to give others an impression of something I'm not. Nor do I want to be like most people who look ultra-religious (righteous on the outside but angry, hateful, greedy and lustful on the inside). So, no more of that. Time for me to look like me.

😱 < Some of ya'lls faces when ya'll just read that line

With the exception of Guru Nanak's birthday (and other special occasions I might be invited to), I won't be going to the Gurdwara anymore. Frankly, attending the UU congregation has done more for me spiritually this entire month than what the Gurdwara has done for me the entire YEAR. On top of that, there's no role I play in the Gurdwara so there's nothing to hold me down there.

But I will say one thing. The other day I came to the realization that whether I decide to remain Sikh or not, I can still visit the Gurdwara and be who I am. No one is going to be preaching at me that I need to believe the things they believe and or else I'm doomed. Everybody will just be chill, and talk about the Oneness, and all that jazz. It's the complete opposite at most Christian churches (which is why you won't see me at one).

This website is going nowhere (no matter what happens to me spiritually). I could become 100% atheist and still have this site up. Why? There is a desperate need regarding resources for non-Punjabi/Convert Sikhs. And this website has helped a lot of people. Any way I can be of service to people I will.

Edit: Oh yeah. And Kaur Supremacy DEFINITELY ain’t goin’ no where. Got to keep y’all Singhs in check


You might be wondering after reading all this what exactly is keeping me from letting go off my Sikh identity. Well, there's a few things, but I won't disclose what they are. This is a private journey, something I need to work out myself. That doesn't mean though I want to keep those who follow me or are around me completely in the dark. Whoever is cool with my decisions, cool. Whoever ain't can hit the door. And honestly, if you've made it this far, you're a real one (unless your my mom or someone who knows her, then move on because there's nothing to see here). But seriously, you really are a real one if you read through the whole thing. So thank you, thank you, thank you.