It has become evident to me that there is a certain group of people *cough cough* Singhs *cough* who like to jump to conclusions before reading the entirety of my pieces. If you’re not going to read it all the way through, just save your energy and click off. Secondly, to my non-Sikh readers. Yeah, hi. I know you’re reading this. I would like to give a preemptive warning. This post is not an invitation for proselytization. Not only am I knowledgeable in regards to most other religions, but I also have a few issues with some. That being said, unless you want to be offended, keep your religious beliefs to yourself. And lastly, to those who have arrived at this website after finding Sikhi,  I extend to you a very warm “welcome”. Just know that this will be my last post, but don’t assume that I’ve gone away for good. The email will remain active and feel free to reach out anytime for assistance. 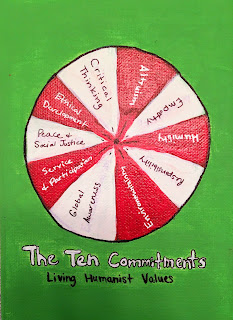 (A painting I did stating the 10 commitments of Humanists)

For the longest time, I had this tweet sitting in my drafts. It states: “I feel like big things are coming towards the end of 2019 for me. Don’t ask me why, just do”


As the year progressed, I saw no reason why this would be true. But now, I realize that I was right. Not only am I switching my major and no longer pursuing a business degree, but I have come to the conclusion that I am a humanist.


Why am I no longer a Sikh? Simple. After a lot of self-introspection and wrestling with my own doubts, I've come to the conclusion that I don't believe in the divine. That I can't base my beliefs off of other people's supposed experiences. And even if I believed in the divine, who am I to put "God" into a religious box? I don't often bring this up when telling my story to people, but I was irreligious before coming into Sikhi. And because of circumstances at that time (being enrolled in a private Christian school and being surrounded by Christians), I had to keep my worldview on the down-low. Which means I never really got to meet any other secularists/humanists/atheists/agnostics nor live out my faith (or shall I say, lack thereof) to it's fullest. And still wasn't able to figure how to think versus what to think.

Another thing also comes to mind. Back when I was on Facebook, there was this European lady I had friended. I didn't know who she was, but I noticed she had several Sikh friends on her profile. And there must have been a post where I was riled up about something because she messaged me privately and said, "I use to be a Sikh until I couldn't take it anymore. Just know that if something is bringing you the complete opposite of peace, it's okay to leave it. And I think you will have the bravery to." I blocked her. I thought, "That would never happen to me! Who does she think is?! Who says that Sikhi won't bring me peace?!". Guess she knew what would happen.


So what exactly makes me a humanist vs. a simple atheist?  For several weeks, I've been documenting what things I put my faith (or trust) in and realized that some of those things can be categorized under "protection" and "support". Unlike the first time I was agnostic (when I was angry and egotistical), I realize that in spite of our differences, all human life has worth and should be acted upon as much as such.


With that all of that being said, here is what me being a humanist does not mean


1. It does not mean I’m going to start going after Sikhi. First off, there isn’t really much to criticize. Other than belief in the Divine, some parts of Gurbani I find contradictory, and the hypocrisy most Sikhs seem to practice, Humanist values and Sikh values are very similar. Secondly, I'm a passive atheist. Meaning, I'm not actively going to come after other people's beliefs. Most former Jews, Christians, and Muslims become outspoken critics of those religions because either (1) they realize the theology of some of these groups are harmful and not based in fact or (2) the adherents do not treat them with respect.  And I can say as an Exvangelical, you won't see me either sticking my neck out for Christianity or promoting it as a benefit to mankind. That all being said,  if you treat me and my beliefs with respect, I’ll treat you and your beliefs with respect. If you do want to be disrespectful on the other hand then read number 2. 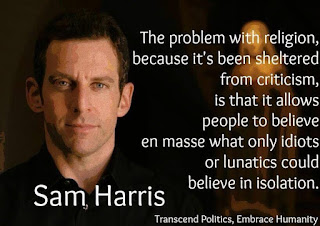 Even though I disagree with Mr.Harris calling people idiots and lunatics, religion does tend to get a free pass when it comes to being critiqued. I believe it shouldn’t be that way, but we got to keep the peace somehow. And independent thought is a right of all mankind. But again, if you don’t want your beliefs criticized, then I suggest you be respectful.

3. It does not mean I’m going to start breaking off relationships with people. When I came out as an ex-Christian to the people around me, they either cut me off or they made me cut them off (due to the belief that they must do everything in their power to save my soul). I feel like this won’t be the case for those Sikhs close to me. Because at the end of the day, Sikhi teaches that you and I are on the same level. And that a person's path is just that, a person's path. So why would I start cutting people off then? Plus I can make you this promise. I will always be an ally to Sikhs and a Kaur Supremacist.


I want to quickly insert a quote spoken by my friend and fellow Kaur Supremacist Jasveen Kaur.

"If anyone stops being your friend...then you know that they were only friends with the idea of you as compared to who you actually are."

It’s true! There will be some of yall who will want no more dealings with me because I’m no longer the “black Sikh convert”. That's fine. It means you were never supposed to be in my life in the first place. I am more than just my religious (or irreligious) identity.  I'm a kayaker. I'm a learner. I'm a planner. I'm a hiker. I'm a baker. I'm a writer. I'm...you get the point. These are all parts of a whole, and if you can't stand that one part is missing, then it's best that you move on.

My hope is that I will finally come to a point in my life that I have a group of friends from a variety of backgrounds instead of one. Growing up, I (for the most part) just had Christians friends. And after going off to college, I (for the most part) just have Sikh friends. This needs to change. I no longer want to be in a confirmation bias bubble (as the Preaching Humanist puts it), and hopefully attending various local organizations will fulfill this goal of mine and diversify my connections.

4. It does not mean that I’m never going to the Gurdwara again. If there's anything I've learned about myself through interfaith work is that I enjoy being in places of worship. (1) They're calm, (2) they're pretty, and (3) they can be an escape from the society surrounding them. Everyone can benefit from just being in some of these spaces. And even though I might not believe in everything written down in it, I still think the physical form of the SGGS is beautiful.

I've also noted in my journal that you do not have to be a Sikh to go to the Gurdwara. Unlike Christianity and Islam (where you'll most likely be hounded to follow the TRUE way once you enter their sacred spaces), no one is going to be shoving religion down your throat in a Gurdwara (well....for the most part). But as I said in the previous post, I will not be actively going to the Gurdwara. Meaning that unless somebody invites me for a special event or some type of occasion, you won't see me there.

5. It does not mean this website, the YouTube channel, and the Facebook page is going anywhere. It's going nowhere. The way I see it, if there’s any way I can help people “find themselves” or make their lives easier, I’m going to help them. To help a person does not require that you have the same beliefs as them, period.

6. It does not mean that I'm going to be rude or disrespectful. If someone gives me a Fateh, will I Fateh back? Yes! Because to not say anything back is freakin' rude and it's really just a person trying to say "Hi". And do I still respond to Gurpreet? Of course! At this point in my life, the name Gurpreet has been forever merged into being a part of my identity. I've always loved both of my names and I will always acknowledge them both.

And when I’m not in my black girl topknot, I’ll be sporting the turban. Headwraps/coverings is apart black culture anyway and it’s sooo convenient (lol)

“So Gurpreet, why don't you just ride quietly into the sunset? Why are you writing about this and putting it everywhere?” Two things: (1) I never leave loose ends and (2) I'm not your ordinary convert. Unlike like your average Joe that might join a religion and leave, I'm Gurpreet Kaur. My name is known (and in other cases, my face is known). If I were to just disappear without any explanation of why, people would start making up their own explanations. Me writing about it sets the record straight while simultaneously protecting my reputation.


Stepping out of the box called religion, I realize that now, I am my own master. Now, I am my own teacher. And now, I hold control over my own body and I have control of my own destiny.

I would like to thank those who have supported me throughout my journey as a Sikh. Whether you housed me, clothed me, protected me, comforted me, feed me, or encouraged me, I appreciate each and every one of you. I would also like to thank all of the Sikh organizations that gave me a platform to share my story. And to the ones who did not support me, who harassed me, who bullied me, who turned on me, who attacked me, who spewed racist comments at me, who spread rumors about my character, who are closed-minded, and who are probably in the comments right now saying "Oh my gawd. Why don't you just leave already?!", thank you. You taught me how to be careful of the company I keep and who I let into my world. And finally, to those will use this article or my situation to make themselves look better, to you I say this. You are just as susceptible to losing your faith as I am. Remember that.


I humbly request to everyone is that you stick with me on my journey in spite of this change I’ve undergone. If you don’t stick around, I understand. There's no need to publicly disclose that either. If you have any questions, please feel free to message me privately. I won’t be addressing anything in the public.

Living by Sight and Not By Faith,
Gurpreet K.