How to Raise Awareness of Sikhism

Waheguru ji ka Khalsa! Waheguru ji ki Fateh! Now some of ya'll might be looking at the title and asking, "Why is it important to raise awareness of Sikhi in the first place?" I'll give you a quick and simple answer using visuals. 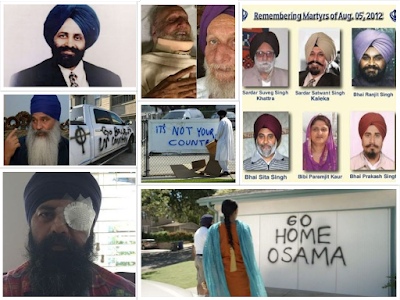 Get it? And these are just some of the most significant cases. This does not even begin to portray the number of hate crimes committed against Sikh Americans post 9-11. Including the bullying of American Sikh children.

Keep in mind that I am not trying to scare anyone; I am just trying to portray the reality of the situation. Which is 1) most Americans are ignorant about who Sikhs are or what Sikhs believe 2) Sikhs have become a target of hate since we resemble he who shall not be named and 3) there are a minority of Americans out there who will let their ignorance transform into hate (which then translates into violence).

We as Sikhs need to get past this whole "we don't proselytize" or "we're afraid to share our beliefs out of fear of offending other faiths" attitude, because at the end of the day, it is and has hurt us. It should be known that there is a difference between proselytization (attempting to convert people to another religion or opinion) and education (giving someone training in or information on a particular field). What we as a community and as a Panth need to do is educate.

So for those of ya'll who care, I am going to show you simple ways that you can do your part to spread awareness without really going out of your way. Feel free to do just one of them or all of them. It's your choice.

A t-shirt is like walking billboard. It is one of the first things that people tend to notice about you (minus your turban, kirpan, etc.). It's a way to say who you are without verbally saying anything. T-shirts can be found on Amazon, Zazzle, and a few other websites.

It is not that hard to make business cards and carry a few around. They're small and fit in your purse/wallet. I decided to make my own after encountering people in public (at places like Walmart and such) with questions while not having the time to adequately answer them. 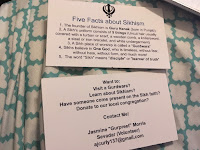 The next step up is brochures. Brochures go more in-depth than business cards and are available in several different languages. I also believe that all Gurdwaras should have a tiny spot where they keep brochures. So if anyone comes and visits the Gurdwara, atleast they leave knowing a bit more about Sikhi. Here are some from Basics of Sikhi and one from the Sikh Coalition. Both are translated into various languages (including English, Spanish, French, etc).

And did you know that just recently Basics of Sikhi released a leaflet on the kirpan? Feel free to click on the link below and print it out

Ok, Ok, I know some of ya'll might think this is corny, but I'm from Texas. And it's a thing here. But think for a second of how many miles you travel in a car. And think of how many people see your car a day. Now add a bumper sticker to that equation. See where I'm going with this? And you don't have to do anything but literally drive  (which we do on the daily). I will say this though. Please don't get those kiss up bumper stickers like "Sikhs love America" and stuff.


4. Inviting People to the Gurdwara

The Gurdwara is open to everyone, but unfortunately, we seem to have forgotten that. I would encourage those who live in the big cities to find their local interfaith organization and see if they have a "passport" program. It's a program where each month, members of different congregations go and visit one congregation. We have it here in Austin and its a very lovely program. All you need to do is send an email to the higher ups and see if you can get your congregation on board (which is often the hard part).

And to those on the Gurdwara committees, how about inviting the local police department to a diwan? I've already seen some Gurdwaras doing this and it is having a positive effect on the Sikh community. Better yet, it would be really awesome if we could invite TSA agents to come, sit down, and have langar with us.

Anyways, I hope this could help all you Sikhs out there (especially the ones who aren't necessarily public speakers or extroverted). And for those who might be involved in interfaith work (like me), I hope this gave you some ideas. See ya later!