The Girl in Blue

How do I even begin this? It's kind of feels weird to even speak about it. But I guess it's time to claim my truth (in a more public fashion). 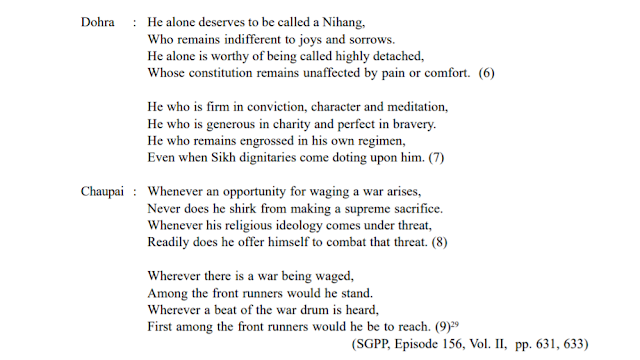 I am an Akali Nihang Singhni....in training (lol). Why "in training"? Well, I hold a high regard for the title. It is not something you just go around claiming. And until I feel worthy enough to claim it fully, you won't really be seeing me sling that title around. Plus, there's this thing in the Sikh community where groups tend to be hostile toward other groups, and on top of that, many people isolate themselves to just those within their group. I think this is very counterproductive and I refuse to isolate myself from others. No matter who you might be, if you claim to follow the teachings and writings of Guru Nanak Dev ji to Shri Guru Granth Sahib ji, you are a Sikh in my eyes. No question about it.

Now, how exactly did I come to this? Honestly, it's been a long time coming and for the rest of this post, that's exactly the question I'll be trying to answer.

Side note: For those who haven't read my conversion story yet, I suggest you go read it. Once you click on the three white bars up at the top, you should see a section called "My Conversion Story" to the left. There's a link that will take you right to the word document.

Let me start out by saying that I have always been fascinated with the physical fitness side of Sikhi. "Wait, there's a physical fitness side to Sikhism?!" Yes, and there has been since the beginnings of this dharam. I remember while doing my research on the history of Sikhism that I discovered that physical fitness use to be a thing for Sikhs. For example, we know that Guru Angad Dev ji instituted wrestling (mall akhara) into the daily lives of his followers. We can assume he did this not only to keep them spiritually healthy but physically healthy as well. Then as I dove deeper into my research, I came across the concept of Sant Sipahi (Saint-Soldier in English). The idea put forth by Guru Hargobind that Sikhs are not only supposed to be saints but warriors as well. This fascinated me and is one of the many reasons why I wanted to become a Sikh. Then, we have the creation of the Khalsa in 1699. From what I understand, the Khalsa was a group of initiated Sikhs set up by Guru Gobind Singh ji to physically fight not only against the Mughals but all oppressors across the globe.* Keep in mind though this is NOT the event from which the Akalis originated. The Akali Nihangs (an armed warrior order) was set up by Guru Hargobind after the martyrdom of our fifth Guru, Guru Arjun Dev ji.

But when I actually started to interact with people from the Sikh community, I found that for some strange reason, the warrior aspect of Sikhi (you know, the physical part) had all but disappeared. Everywhere I went, all I could see were chubby Sikhs sitting and indulging themselves in food and comfort. Hell, even I got a little pouch 😂 Not that its' a bad thing to enjoy the pleasures in life, but why weren't people hitting the gym every now and then. Then, I discovered that most Sikhs wear completely dull kirpans. "Dull kirpans? What's the point of wearing one if the kirpan is dull?". This further confused me (along with a few other things I had observed). What had happened to the Sikh community? What had happened to the Khalsa? I mean, there was Gatka but I could tell that this was probably not the same type of martial art practiced by Sikh warriors historically. Look more "modernized". I also noticed that at some Gurdwaras I visited, shastars were placed in front of Shri Guru Granth Sahib Ji but I didn't know why. "It's obvious that these are an important part of Sikhism, but why does it seem nobody cares?"

Then when I expressed my concerns about these things, people shot back at me. "The kirpan is symbolic! It is not an actual weapon!" "This is extremist thinking! We do not need this sort of thinking over here!" "We are in the West! Why do we need to know self-defense or a martial art?!" "Guru Gobind Singh radicalized Sikhism. Sikhs do not fight!"

My confusion (and frustration) intensified. And with that, I shut my mouth.

I don't remember when I first quite learned about the Akali Nihang Singhs. Pretty sure it had to have been during the first couple of months of being a Sikh. I admired them a lot, and what I knew of their beliefs, I agreed with (some of which could be considered controversial).** “Wow. I sort of think this is what Guru Gobind Singh envisioned when he created the Khalsa Panth." But since most reside in India, I decided not look deeper into it. Then I moved to Austin in August 2017. Right before moving, I had planned on taking horse lessons from a certain well known Singhni from here. To bad that right as I got here, she got up, left Texas, and moved. I thought of then taking horse lessons provided through my university but sort of fell through too. "Oh well", I said.

Then I met two others here following Nihang rehat. Thought it was cool and didn't quite contradict my own personal beliefs. But like everything else, I threw it in the back of my head. Too focused on transitioning into my first year of college.

Then in December/January, I became a Singhni (a dastar wearing Kaur). That was a HUGE transition for me. But after getting over the initial shock of it, I looked myself in the mirror and said "Wow. I look like an actual daughter of Guru Gobind Singh." After that, that warrior spirit which I had basically extinguished came into existence again. And as time progressed, it slowly began to grow. In April 2018, I received Amrit, and as a gift, one of my friends from the UK sent me the book "Warrior Sikhs". I read through some of it and thought it was pretty neat, but like most things, I threw it in the back of my head.

Okay, this is getting long so I'm gonna speed this train up. One day on Facebook I acknowledged my

interest in Nihangs. Brother from the UK hit me up. Learned some things. Was shocked (in a good way) about what I was learning. Continued to learn from him. Connected with a few other Nihangs through social media. Couldn't believe this was actually happening. Decided one day this is the path I wanted to go down. The End.

So there you go. I won't go on rambling. There are a few things that I left out since this post is getting really long. I hope that I offended nobody (since that seems to be my talent lately) and forgive me for any mistakes I've made. Especially grammar-wise. Ok, now I'm going to end this.

*Even though the Khalsa is supposed to physically fight against oppression, that is not the only way we're supposed to combat evil. We also can this through political means, verbal means, writing, protest, etc.

**The same way a person might be a Democrat or Republican and not agree with all of the parties policies, is the same way I might not 100% agree with the positions Nihangs take on things. More like 85%. If you think about it, even people within the same group often disagree on what they really believe or how they should act. We're human. This is to be expected. And I'm just trying to be honest.

Update (7/16/19): With the passage of time, comes growth. I've come to realize over the past year how meaningless these titles are and how much these jathebandies have caused division within the Sikh panth. Though I do still follow some of the rehat of the Budha Dal, I know longer affliate myself with the organization or call myself a Nihang. I am purely a Sikh of the Guru now. And hopefully, Sikhs will come together and reclaim that as well.