The Struggles of Non-Punjabi Sikhs

Just a forewarning. First of all, I know there are Indian Sikhs who aren't Punjabi. But when I say "Non-Punjabi Sikhs", in this case, I am referring to white, black, Asian, etc. Sikhs. So there's that. Second of all, some of ya'll Punjabi Sikhs will be able to relate to some of the things I say. So it's great that we can all come together and relate to the struggle somehow lol.

Oh, and this might be long. But bless my hard work by reading it anyway. And as always, excuse me for incorrect grammar. Thank you ji 🙏

Have you ever been the only white/Indian/black person in a room? Feels awkward, doesn't it? You know what doesn't help? When half the room decides to stare at you for a very uncomfortable amount of time. Ok, not half the room but a handful of people in the Sangat. I know I'm black. You don't need to remind me of this lol. But to be fair, how many times in your life will you have met a black Sikh? So that's excuses you....for now. And to my convert Sikhs, if you hang around Sangat for enough time, the stares will stop eventually. So just endure it for now.

Now, I already made a blog post about this so I'm not going to go in depth. But I'm going to make a bold claim here. If Gurdwaras don't start integrating other languages into their services, Sikhi is going to start disappearing generation by generation. Now, I already hear some of y'all. "Learn Punjabi Gurpreet!" Yeah, sure. But what am I (and other converts) going to do in the meantime? Learning a language takes time.

Before I became a Sikh, I had zero experience with Indian food. So when I converted and started eating Indian food, let me just say it was a rollercoaster ride. My taste buds were in agreement with the new food, but my stomach....yeah, it wasn't. This resulted in frequent trips to the bathroom lol. Now, I crave for Indian food. Like Maggi and pakora👌

Growing up, I've always been a shirt and jeans person. I mean, it's normal to wear jeans and a t-shirt here. But not in a Gurdwara 😂 Literally almost all the ladies are dressed in traditional Punjabi suits. I don't own any personally, but I enjoy dressing up in them. That doesn't mean though I'm going to give up my jeans and t-shirt. I don't care how much the aunties talk (LOL), it's what I'm most comfortable in. That's probably another reason why a few people might stare. Plus, have you seen how expensive it is to buy suits? Like, danggggg

We would love to think that all Gurdwaras are places of welcome and love. But there are some Sangats out there who are flat out mean, exclusive, and racist/casteist. I've heard multiple stories from several Sikh converts who have gone to Gurdwaras and been flat out ignored, rejected, discriminated against, etc. As Sikhs, we are supposed to be nirvair (without hate). What picture does that paint of Sikhs when they behave in this way? I've been to a few Gurdwaras and been ignored. It is not a good feeling. It drives people away from Sikhi, Sikhs, and must importantly, our Guru. Also, I've had experiences where it's time to receive Prashad in a sangat (not the one I'm attending now), and the guy handing out prashad pretends like I'm not even there and acts like he's going to skip me. Like, you can tell when it's done intentionally versus when it's accidental. And since prashad is one of my favorite foods, that is an automatic way to get on my dislike list. So I make a benti to the Sangat. Please, PLEASE say hi if you see a new person in your sangat, and ask them how they're doing. That could change their whole view on the Gurdwara. Remember, a lot of us converts are coming into Sikhi without our families, friends, and community in general. We are looking for Sangat, a family who can help us grow.

Thank God for the internet, because without it, my knowledge of Sikhi would be comparable smaller to what I know now. There should be some Sikh organization here in the US catered toward helping converts learn about this religion (sort of like Basics of Sikhi). Heck, I am an aspiring entrepreneur so might just go ahead and do it myself. So, anybody willing to invest in my project? No? Didn't think so 😂

So, I'm going to end this. Hope you were enlightened. As always, if I offended anybody, just know I didn't mean to offend you. I'm just expressing my thoughts, on my laptop, on my blog. I leave you with this funny pic. 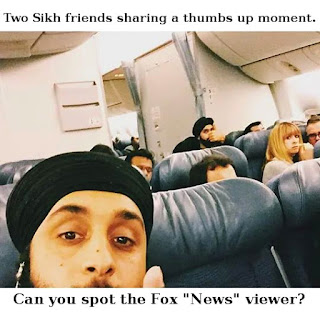 Update (7/21/2018): I honestly love this blog post. Now that I've 85% integrated myself into the Sikh community, I can help other converts integrate into it as well. And lol, that lady though.