How to Promote Women in the Sikh Community (Women's History Month) 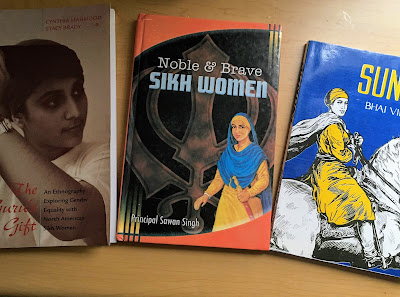 Waheguru ji ka Khalsa. Waheguru ji ki Fateh. In the United States, March is declared as Women's History Month. And as someone who is a woman and a Sikh, I've decided that I am going to focus this month on learning the history of women in regards to Sikhi. Unfortunately, there are not that many Sikh resources out there that focus on solely Sikh women. I find that when the Sikh narrative is told, women are 95% of the time left out. And when there is a woman included, it is usually focused on ladies like Mai Bhago, Mata Sahib Devan/Kaur, Mata Gujri ji, or Bebe Nanaki. The reality is that there are way more women who are significant to Sikh history then what is presented. And we as a community must make sure there is equal representation. Because as Guru Nanak Dev ji says:

"Among all the women and men, the One's light is shining."

So how exactly can we make sure women are equally represented?

There are books out there focused on Sikh women (though few). They are not that expensive and are not that long. I highly recommended Principal Sewan Singh's book "Noble and Brave Sikh Women", because it focuses on significant female figures from a historical perspective rather than a mystical perspective. And not just women living during the Gurus times, but after as well.

Lastly, the book "The Guru's Gift" explores the lives of not just Sikh women who wear dastars in North America, but the general view of women in Sikhism as well. The co-authors themselves are anthropologists who are not Sikh, so it's interesting to read what they have observed from their perspective as well.

There are also articles out there on Sikh women. One is "10 Bada*s Sikh Women in History" written by the editor in chief for Kaur Life, Lakhpreet Kaur. I highly encourage everyone to look it up and read it. It's a very quick read.

In regard to videos, I encourage everyone to check out the short film animation "Kaur" produced by Sikhnet. Follow the main character, Saibhang Kaur, who struggles with pursuing her passion for science since she is told it's a "boy thing". In order to encourage her, Saibhang's grandmother recounts to her granddaughter the story of Mai Bhago and how she led an army of 40 men into battle.

Can someone tell me why the majority of our leadership within the Panth are still male? Can someone tell me why the title of "Sant" seems to be exclusively for Sikh males? Can someone tell me why we went from having a significant number of female preachers (such as Bibi Bhagbhari) under Guru Amar Das ji to having very few? The Sikh community is slowly changing this, but as females, I feel that we can not wait for change itself. It is time that we stop hiding back in the langar hall kitchen and claim our seat at the table. We are Kaurs! Whether you define that as "princesses" or "lionesses", our Gurus have given us the power to have a voice as well. Several of the major world religions have a one up on us in regard to female representation. And seeing that this is the 21st century, Sikhs should be ahead of all of them. And I mean ALL of them. So to all the females who are reading this, be a Granthi. Be a warrior. Be a Sant. Be an educator. And to all the males who are reading this, encourage your sister, your aunts, your mother, your wives, and your female friends, to pursue these routes. And if anyone tries to block them, stop them.

As Sikhs, we love to honor our Gurus, our shaheeds, and others who have done significant things in the past. And even those who are doing significant things now. We hang up pictures of them. We celebrate holidays revolving around them. And we tell their stories again and again. This is one thing I love about being a Sikh. But what does this have to do with women? Oftentimes if you walk into a Gurdwara and they have pictures up of martyrs or just great Sikhs in general, 99% of them are Singhs. If you are on a Gurdwara committee or have any say about it, how about you hang up pictures of females as well? What a difference it would make if a little Kaur could walk into the Gurdwara and see someone up on the wall that looks like her. And even though none of the Gurus were female, let's have a dialogue about their wives. They did significant things as well. Mata Kheevi ji (Guru Angad's wife) is actually mentioned in the Guru Granth Sahib.

"Balwand says that Khivi, the Guru's wife, is a noble woman, who gives soothing, leafy shade to all. She distributes the bounty of the Guru's Langar: the kheer - the rice pudding and ghee, is like sweet ambrosia."

By Gurpreet Kaur No comments: