How the Sikh Community Could Improve (Yes, Even We're Not Perfect) 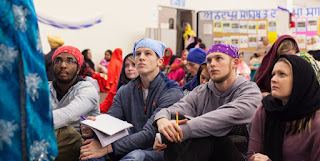 Authors Note: I originally published this article back in September on my blog, and it received a mostly positive and also somewhat negative reception. Know that this piece is targeted at those who are new to the Sikh faith and explains to them some of the shortcomings of the Sikh community. The reality that Sikhi is perfect, but we are not. Also, for those who are new to the faith, feel free to check out my Youtube channel by clicking the link below.

Now into the actual article

"Waheguru ji ka Khalsa! Waheguru ji ki Fateh! I'm up late tonight writing this, so if I sound incoherent during some parts, that's why. But who knows, maybe this is the best time for me to flex my writing muscles. Anyways, let's get straight into it.

Oftentimes as converts, we come into the Sikh community thinking that everything will be 100% perfect and that we have joined the most perfect community on Earth. But after a few weeks of being around our fellow Sikh brothers and sisters, we come to a rude awakening. That is, that this community is farrrrr from being perfect. To some, this revelation can be shocking. For others (including myself), it isn't surprising at all. What are some of the shortcomings we might see within the community? Let's discuss.


1. Sikhs and Their Businesses

I find that there are a lot of successful entrepreneurs and businessmen within the Sikh community. And as a business student, this is inspiring. But not all businesses follow what some Sikhs would consider "Gurmat". Some Sikh owned stores sell alcohol and tobacco. Some Sikh owned restaurants might serve halal or kosher meat. Some Sikhs might even have a marijuana business. To newcomers in the faith, this can be shocking. But we must realize two things: 1) Some Sikhs feel justified to do this since they themselves are not partaking in the act of drinking or smoking and 2) not everyone who claims to be a religion follows it. The same way you have Muslims who eat pork and Jewish people who don't observe the Sabbath (like, at all), there are Sikhs who don't follow all the principles of their religion. But does that mean we should judge them? Absolutely not. Because I can bet a lot of money there are certain things we all should be doing as Sikhs on a daily basis, but we're not. So let's all work on ourselves before trying to work on our neighbor.

Update: I've gotten a lot of heat because of this section. Unless you want to have an actual conversation about it, don't message me saying  "Stay in your own role stupid girl!" That makes you look bad.

Sikhi is a religion that promotes full gender equality. So why is it that women can not sing at Darbar Sahib (the Golden Temple) or be apart of the Panj Pyare? In the words of Emma Gonzales, "I call BS!". The reason women can not do kirtan at Harmandir Sahib is really stupid and I'm not even going to discuss it here. But I can say with confidence that almost all of the Sikh community agrees that this goes against Sikhi. Even petitions have been started to get rid of this rule. But until the SGPC and the Akal Takht change their minds, all we can do is talk and raise our voices against this injustice. Now, when it comes to the Panj Pyare situation, I know I am walking onto a landmine by discussing it. Basically, from what I've been told, people who don't support women being apart of the Panj Pyare say that "Historically, the Panj Pyare was all men. So we are trying to replicate history." Ok then. If ya'll are really trying to copy history, let's do this. From now on, all the Panj Pyare have to have been born in Northern India. They must either have the names Dhaya, Dharam, Himmat, Mohkam, or Sahib. If you don't qualify, oh well. Sucks for you. Say what now? You think that's dumb? Oh, I thought we were trying to be "historical" remember? Please find a better excuse then to why women can't be Panj Pyare. Thank you.

I've kind of already touched on this in a previous post or two, but some Gurdwaras can be flat out uninviting to outsiders. I mean most here in Texas are friendly enough, but there's a few that give me really bad vibes. And I honestly feel lucky to have loving Sangat from all over the state of Texas, because some of the nightmare stories I've heard from other converts across the US make me wonder how Sikhs could conduct themselves in such a bad manner. Here's the usual scenario I hear:


"I can't wait to go to the Gurdwara! Sikhs are so welcoming and loving and blah blah blah."


*Attends the service, but has trouble following along because there are no English translations displayed and nothing is said in English*


*Nobody talks to or approaches that person. Sits alone*


*Person goes home devastated. Contemplates whether or not to go back to the Gurdwara*

This is just a basic outline of what I typically hear from those new to the faith. The stories vary though (and not in a good way). This is why I urge all Gurdwara committees, presidents, and Sangats to PLEASE reach out to new attendees. It doesn't take but 5 seconds to say "Hello. We are glad you attended our service today. Please reach out to us if you need any help." That simple.

You would think that people coming into the religion would know there's a lot of drama within the community, but surprisingly some don't. And when they discover it, oh man, it can be hard for them to comprehend. You see, they don't understand that there's drama between Gurdwaras, drama between people on the Gurdwara committee, drama between people in that one Sangat, etc. etc. It's a normal thing that occurs. There's drama between the jathebandies (AKJ, Dodra, Sikh Dharma, Taksalis, etc.) and drama within the jathebandies. There's drama on Facebook, on Twitter, on Instagram, on all of social media. No matter where you go in this community, you will find drama. My advice to everyone would be DON'T participate in it.


So yeah, that's the blog for this month. Could say more but think this is enough. Thanks to those who recommended I talk about this topic. This one is dedicated to ya'll. Anyways, good night and I'm out 😴